There are several different ways to escape to another world and enjoy hallucinatory effects. By 2018, I was certain I had experimented with every imaginable type of “trip”…some good and some bad. Until I went to Kona on the Big Island of Hawaii and had the best trip of my life.

At the hotel I was staying at, someone told me where to get the good stuff and how much it would cost. I trudged through the sand until I arrived at a small beach hut. I handed over my sweaty cash to the tan surfer/hippie and I got my stuff.

I was nervous about the trip I was about to take. It was my first time and I didn’t know what to expect. I parked my bikini-clad tush on the shore and casually looked around the beach to see how other people were doing it.

People of all ages were having a great time—they made it look so easy. They didn’t have a care in the world. I wanted that too. I was ready to detach from reality for the next two hours with the $25 I just paid for my escape.

I lowered my rented snorkeling mask down over my face. Slipping my feet into the fins was easy, but walking in them was a different story. Nancy Sinatra’s “These Boots Are Made for Walking” started playing in my head. Except my version was “These Fins Aren’t Made for Walking.”

I considered crawling on hands in knees and gliding into the water, channeling my inner 500-pound Hawaiian monk seal, a creature that felt like an accurate depiction of my movements at that particular moment.

But, I had neither grace nor gravity on my side as my trip kicked in. I stumbled into the water, spraying a fountain of sand and water. Couples and families scattered away from the rookie snorkeler, clearing a critical path so I could flail in isolation.

I was in. Phase 1…complete. 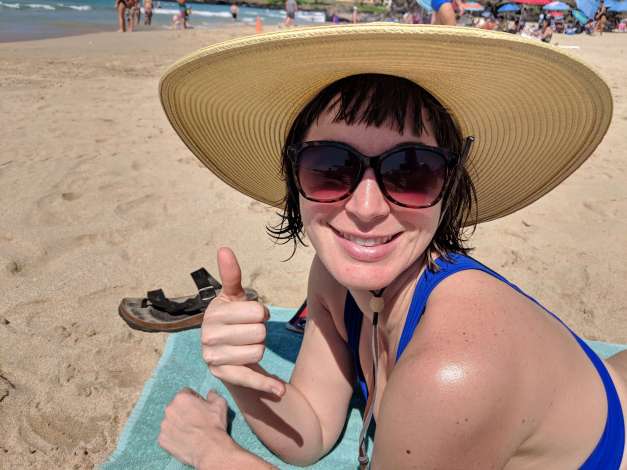 Now it was time to put the plastic breathing tube in my mouth and try not to think about how many other previous tourists had done the same with my rented mask. Next phase…stick my face in the water, float and kick my fins ever so gently, and enjoy my trip.

The water visibility was piss-poor at first. What gives? I thought Hawaii was one of the best places to snorkel. All I could see was sandy blue water and I wondered if the tan surfer/hippie in the hut had duped me.

Eventually, the sand settled back down onto the ocean floor and my vision slowly adjusted. The hallucinations had officially kicked in. I blinked hard and stopped breathing.

I saw an orange thing, a blue thing, an orange/blue thing, a pink thing, a yellow thing…then there were fifty colorful creatures floating through space like it was freaking rush hour under the sea.

I couldn’t believe my eyes. Because I had forgotten to breathe through my tube, I started choking violently. I jerked my head up out of the water, inhaling with gusto, once again channeling my inner 500-pound Hawaiian monk seal with monstrous sounds that terrified small children nearby.

Above the surface, my chest heaved as I threw off my mask and caught my breath. Fully tripping out by this point, I tried to pull myself together so nobody else knew I was on something. It was a hallucination. These things happen sometimes.

No, it wasn’t a hallucination…a realization that totally freaked me out. A completely different world existed under the sea that I didn’t know a damn thing about. Movies, documentaries, books, Instagram videos, and screensavers had done this undersea world a disservice.

All those years I spent in the ocean, growing up in Southern California and traveling around the world. Yet, I never knew what lied beneath the surface—a colorful cornucopia—a busy-body society like ours, a fragile ecosystem like ours.

I wanted to “trip out” again. I could handle it this time, without drowning in awe.

Everyone else’s swimsuit asses and snorkeling tubes were happily bobbing up and down in the water as they observed the secret underwater society. It was time for my snorkeling ass to get back out there.

I took things slower this time and focused on my breathing. Once again, it was cloudy and then the clouds parted to reveal one fish, a few fish, then suddenly…fifty fish. How could something so familiar like the ocean become so radically foreign to me when I took a peek inside? I was beyond high…I was levitating.

I lost track of time. Because here, time didn’t exist. I managed to make it back to the beach hut right before my gear rental time was up. My sea legs attempted a jog in the sand. No longer the monk seal on dry land, I had turned into a giddy wet muppet.

And, that was it. That was how I got hooked on snorkeling. I snorkeled every day of that trip, addicted to this secret underwater society that I was now strangely a part of.

As we go through life, we can fall into this trap of feeling like “we’ve seen it all.” This was one of those times when I was proven wrong and I will never forget it. What about you? Any “good trips” that turned your world upside-down?

Before talking to Dr. Mareike Dornhege on Love Your Enthusiasm, I knew next to nothing about sharks and have never encountered one. Unless you count that silly Jaws ride at Universal Studios, where the tram dips suddenly toward the water while a plastic shark “attacks” the tourists.

What we think we know about sharks? Turns out…a lot of misconceptions. I was so nerdy-happy to chat with Mareike on the show about her shark passion and wisdom.

From a young age, Mareike drew scientifically-accurate sharks instead of flowers and kittens. Her love for sharks eventually brought her to her calling as a shark ecologist who is on a mission to bring more awareness to the world about the beauty of sharks. Mareike was also one of the only women to host Shark Week 2020.

If you are looking for an escape, Mareike’s deep-sea adventures take you to this otherworldly place I just described. Where I only scratched the surface with snorkeling, Mareike has journeyed much further into the depths of the ocean to see and study some truly extraordinary creatures and ecosystems.

Grab your fins (er…headphones) and enjoy!