Last month Jilanne Hoffman reminded us how important it is to take chances in life, to go after the thing that makes you sing. In my monthly series, The Life Enthusiast Chronicles, fantastic people share, quite simply, what makes them enthusiastic about life.

Today I have Eli Pacheco (aka Coach Daddy) from Charlotte, NC hanging out with us. Eli is a non-stop Life Enthusiast, sharing stories about parenting, sports, and life that are so down-to-earth and touching that you can’t help but love the guy.

Eli also has an ongoing project on his blog called “6 Words,” where he brings a community of writers together to share their thoughts on the topic within the challenging limits of 6 words.

When I participated back in December 2014 for “New Year’s Wishes, in 6 Words” my answer was: Being awesome with people I love. Thanks to Eli’s prompt, I’ve kept those 6 words with me throughout the year.

Oh, I pretended to be taller. I insisted on my 5-7ness, in fact. I had to be at least as tall as Spud Webb, right? He won the dunk contest. If I could be 5-7 … I harbored visions of the good life.

I wish I was a little bit taller

I wish I was a baller

I wish I knew a girl with a phone, I would call her

Life’s not easy at 5-6 for a sports writer. You have to stand on toes to get quotes from power forwards. Or even shooting guards. That last bag of ginger snaps on the top shelf at the Food Lion can prove elusive. Don’t get me started on the disadvantages of being short AND left-handed.

(Plus, I’m Hispanic with a cursory grasp of Spanish.)

So those things that breathe the life enthusiast in me are those that let me soar. They’re the aspects of life that allow the turkey to soar with eagles. It’s a trinity of writing, fatherhood and coaching.

It’s so elusive for so much of life! Delusions of life as an NFL quarterback fizzled by fifth grade. Dreams of swinging the axe as a baritone sax player in a studio jazz band exited stage left by high school.

Five years later, with the growing baby girl who ushered in my fatherhood period, I fell into my final calling—coaching. How do you describe what it’s like when the tumblers line up in the universe and you find yourself doing those things that set you free?

You really can’t. So you pursue them all with all the gumption of a gliding turkey. Often, you do it with all the grace of one, too.

When imagination meets laziness … you get put in the ‘gifted program’ in school.

So many ideas floated around in my head. Writing? That’s work. I’ll be over here staring at the ceiling and envisioning the next great adventure as a quarterback/dinosaur/stormtrooper. It’s what goof-offs do. Then, it happened.

My new high school didn’t offer a jazz band elective. Although music was my life, it wasn’t pursued with any vigor. I hardly practiced. So when I lost it … it didn’t leave an immediate void. So I signed up for Astronomy instead. Only, no one else did.

So my unknown guidance counselor signed me up for Intro to Journalism. It wasn’t history in the making by any stretch. I missed class. I busted deadlines. I gazed through the open window. Then, I wrote a piece. Just one story, about a new pro basketball team in town.

Then, another. One more. Tons more. I wrote love notes to girls and truce offerings to my dad. My underachieving ways followed me to college. I wrote more. I joined the campus newspaper staff. I edited, wrote more, learned more, grew. All on academic probation, though.

Then someone said it: Man, you work hard at this.

Me? I’d never worked hard at anything. Except for taco Tuesday.

I loved words. I read them and I wrote them, and even today, when the world makes no sense, I can key on a keyboard and read others’ words and add my own, and finally set forth my thoughts on issues that ruminate in my mind until they’re ready.

I’ve become a slow-cooker of words. Sometimes turned on high, but always on.

There are no guidebooks, no classes. There’s only example, and that’s not really that keen. If we’ve had a rough experience as a child of a dad, well, we know what fatherhood is not. We gain the sense that it’s not an easy job at all. Some of us never learn what it is to be a good kid.

I didn’t know it, but fatherhood began before I ever met my first girl.

It began on days I spoke to her in her mother’s stomach. It began on days spent daydreaming of our child and nights dreaming of who our child would become. It became real when that first daughter cried minutes after birth, then grasped my finger, listened for my voice … and sighed deeply.

Two more daughters were to follow. It’s been trial and error, the ultimate seasons of not keeping score. It’s like trailing in a ballgame every inning and period and round, or feeling so, but then glancing at the scoreboard to see you’ve got a lead going. Narrow, but a lead.

You see it as your daughters stand tall and strong in adversity. As they choose friends and tolerate enemies. In how they care for each other, how they succeed and fail, how they look to you on the sideline and co-pilot life with you and reveal the humans they’ve become. And that you’ve become.

It’s communication and its fatherhood, so both writing and fatherhood wrapped into one.

It took me by surprise. I helped out on assessment day for my first daughter’s league. I found myself on one knee with a boy, teaching him to juggle a soccer ball. Me, the dude who not only barely made any team he tried out for (and didn’t make many more) but also had never even worn a shin guard.

Those who can, do. Those who can’t, teach. I lived this. I rummaged through books, including An Idiot’s Guide to Coaching Youth Soccer. I pestered coaches after games I’d cover for newspapers about the subtle games within the game. I watched, I learned. I failed, a lot. I look the part of a buffoon.

I connected with the kid who couldn’t connect. I found common ground for him and the naturals. I discovered ways to reach those who just counted the moments to snack time. I was that kid. We shocked opponents, embarrassed ourselves, reached highs and lows and did it all together.

There aren’t many things I’m a champion at. My handwriting sucks. My desk looks like Baghdad. Ditto, my car. I miss spots when I shave and the cuffs of my pants bear the wear and tear of a man who often just doesn’t fit. Even in his own clothes.

But, just give me that chance in one of my places. Because even the turkey can soar to incredible heights, at least high enough for that last bag of ginger snaps.

And that’s where enthusiasm meets the beauty of life.

When I’m down here, I’m filled with dreams of up there. 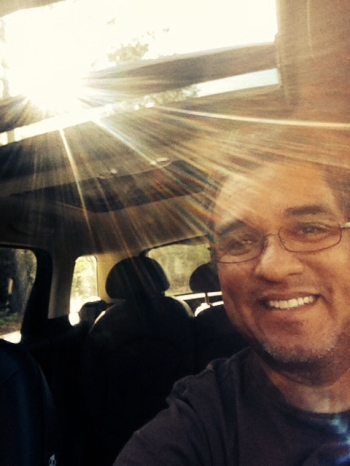 When he isn’t interviewing people too cool for him or answering questions for his three daughters, Eli Pacheco writes the blog Coach Daddy. Follow him on Delicious, Google Plus, LinkedIn, Pinterest, Twitter and Tumblr.

48 thoughts on “The Life Enthusiast Chronicles with Eli”