For the longest time, I didn’t like beer. Because I was doing it wrong.

Like most youngsters in the US drinking under the legal age of 21 (gasp!), I drank what I could get my hands on. Typically that was watered down piss masquerading as beer which guaranteed a blinding hangover.

The first time I had real beer was in Munich when I studied abroad in college. I was on a bike tour and we stopped at the English Gardens for a beer break. Never one to like beer previously, someone recommended I try a Radler—half lemonade, half beer.

Though I was skeptical, I was soon enjoying my second glass, a changed woman forever. You see, I’m half Czech and part Irish, and a love for beer is in my blood.

Besides water, tea, and coffee, that’s all I drink now. Occasionally a little wine or a Moscow Mule, but I’m all about phenomenal beer.

When we moved to Portland last year, Bend was on our getaway list. For Mr. H’s birthday last weekend, we finally went. (If you missed last week’s post about Bend’s nature, be sure to check out Beautiful Misery.)

If you bring up Bend around any Portlander, you will get the same response from everyone…I love Bend!

And, we could see why.

Besides the high desert climate with soul-stopping  volcano views, Bend is a small, laid back town with happy people who have a knack for two lovely things. Food and beer.

While one can certainly take the predetermined Bend Ale Trail around town, we narrowed it down to three breweries that were non-negotiable.

To tell you how much we love Boneyard Beer, we go to specific restaurants in Portland JUST because they have their glorious IPA.

Why? Because you can’t buy it in any store. Seriously, my boss even tried buying it for me for my birthday since it’s my favorite—and he just plain couldn’t.

You’ll notice in the picture above that the brewery is located in an old auto repair shop. People cram into the tiny tasting room, stand around because there is nowhere to sit, and drink delicious beer.

It’s not a fancy place to hang out it and be seen. It’s all about the beer.

And that rebellious no-frills atmosphere made us adore Boneyard even more. In case you couldn’t tell by the ridiculously goofy smiles we have on our little faces.

But if you want amazing beer with some frills, Crux Fermentation Project is the place to be. Earlier that day was our epic hike at Smith Rock, so we were ready for lots of food and beer.

When we walked up, we were afraid there was a private event going on. There was a tent outside with people drinking beer everywhere. Not just adults, but entire families were hanging out.

We had stumbled upon their Sundowner Hour, with specials a half hour before and after sunset. And that particular day was crystal clear and sunny.

So we joined the sunset party, which consisted of everyone enjoying damn good beer and waiting for the big show. An amazing sunset. 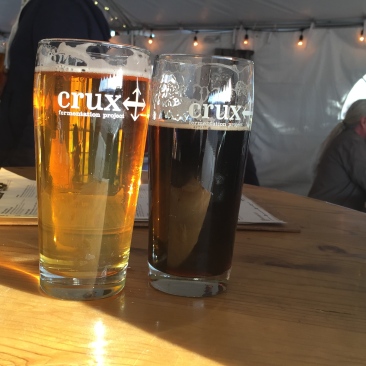 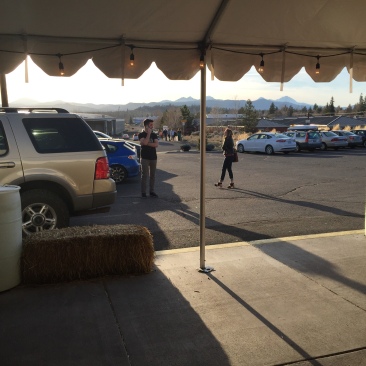 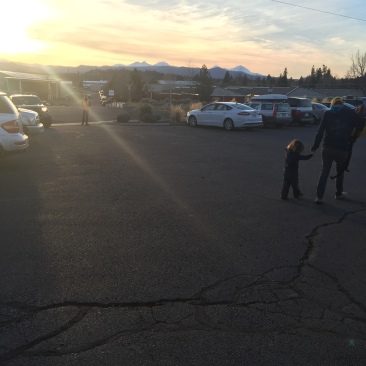 It was a celebration of nature and beer. Everyone stood around watching the sunset together, smiling and quiet, sharing an unbeatable moment.

On our last night, based on several recommendations by fellow beer enthusiasts in Portland, we headed over to Silver Moon Brewing. A dive bar through and through, locals with thick beards and/or cowboy hats filled the place.

With St. Paddy’s just a few days off, we lucked out with a live performance by Five Pint Mary, an Irish/Celtic/Eastern Euro rock band from Bend. By the end of the night, everyone was dancing, including yours truly.

It doesn’t matter if you can’t dance or don’t know how to dance to such music, everyone was moving. Here’s a little tipsy video clip I shot…

All around Bend gets a huge thumbs up from us. We shall return when our bellies and livers are ready.