If Brooklyn and Paris mated, their love child would be Montreal.

Grit and grace. Hard asses and romantics. The ones that won’t look you in the eye and the others who stare right at your ass.

This paradoxical city is emphasized further by its language tug-of-war. French is everywhere: the parking signs, the menus, the spoken greetings.

Yet, a sorry attempt at some high school French by an American tourist (yours truly) flips the switch. Seamlessly, as if “Bonjour” were never stumbled over, the conversation morphs into English with a peculiar flourish.

Walking down the street is a puzzling treat as English and French interlace. A couple at a table next to us bounces back and forth – a French question, an English answer, then one, then just the other – like a nail-biting tennis match for the ears.

Taking a road trip will only confuse the American more. Living in the U.S means conquering an ocean to hear that steady foreign hum. 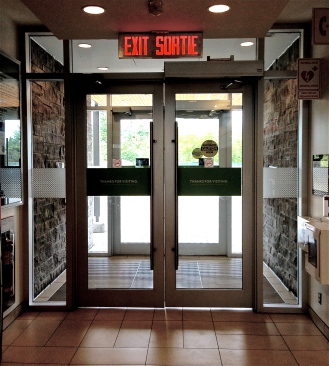 Eventually, there’s no more English. None. Our foreign experience creeps up on us in the form of construction signs and unpronounceable roads.

Where the hell are we? North America? Canada?

Each languid day is strange – no schedule, no obligations. And, Mr. H. and I wander around this land without time.

One of the deepest ways to connect with someone means surviving together in a place where nothing makes sense, somewhere that is the antithesis of home, routine, and grind.

Travel makes the heart open to possibilities. And, so we opened ours to Montreal and did all of this…

And, we got down at Piknic Electronik at sunset on an island. Yeah, it was cool…

But, what about the food, Britt? Montreal is one of the foodie capitals of the world, isn’t it?

Indeed, it is. So, food gets it’s very own post next week. Get ready to drool.

18 thoughts on “The Grit and Grace of Montreal”