Rome. Just the name of the city spoken or written does something all on its own. It gives us a rush, a sensory high that hits hard, leaving us in a state of wanting.

The Rome I knew was from textbooks, lectures I yawned through because I’ve never been the ancient history kind of girl. Later in life a predictable attraction with Rome happened through films, as the city’s boisterous seduction came at me through the screen.

Want to listen to this blog instead? Hear Britt butcher Italian (and some English) by pressing play…

…OR, if that idea terrifies you, carry on!

I began to wonder what the real Rome would be like. Truthfully, I thought it was overrated and it was never high on my wanderlust list.

Seemed like everyone I knew had been there or wished to be there, and at the very mention of the city, a whimsical daze fell upon them as their busy minds surrendered to the alluring distraction.

After a layoff this year, for some crazy reason I knew Rome was the place I needed to escape to. I wanted to see the city they called “eternal,” because I’ve always liked that word. To me, it means surviving beautifully.

That’s what I wanted to do after a rough year. Survive beautifully—to scrape up a little grace and live on. 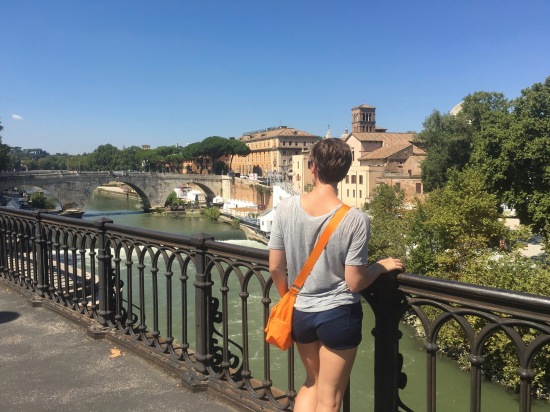 But, I wasn’t prepared for Rome’s everlasting pull.

Days later, typing up this blog post in my robe on my couch—with the Portland drizzle letting me know there’s not a chance in hell for an Indian Summer—I can still feel the golden sun soaking into my eager bones, see the woman’s bare olive arms wrapped around her man’s torso on a zippy scooter, hear the honking melodies and the jeering Italian conversations that sound like fighting when they’re only discussing the next delicious meal.

When you visit Rome, it’s not about what you do. It’s about how you savor it.

How to Savor Rome’s History

While I’m more in the “live like a local” camp while traveling, tourist attractions are attractive for a reason. In Rome the exploration options are endless, and you will turn a corner to catch a random site that will stop you right in your tracks.

Choose your top must-see site and a few secondary sites—but don’t choose them all. Be sure to spread out your adventures, so you can truly soak in the majesty.

If you’re cramming in too many attractions, you can’t fully digest the experience and you’re being counterproductive to the reason you’re traveling in the first place.

For us, the Colosseum was our top must-see site and we splurged on a VIP tour with Walks of Italy to be able to see the underground and third tier. Included in the tour were the Roman Forum and Palatine Hill to round out a very hot summer afternoon that was chock-full of tales and tidbits over the course of 3.5 hours.

The tour guide, Angela, was cute as a button and she managed to keep us entertained and energized—despite the fact that we all felt like we were being slow-cooked in a fine coating of ancient dirt. 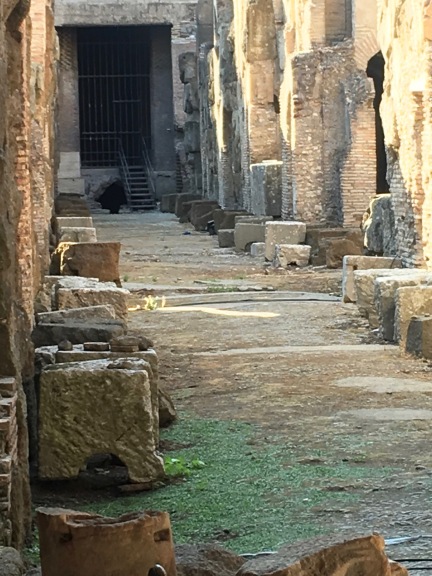 How do you know if you’re truly savoring Rome’s history? You will get emotional. 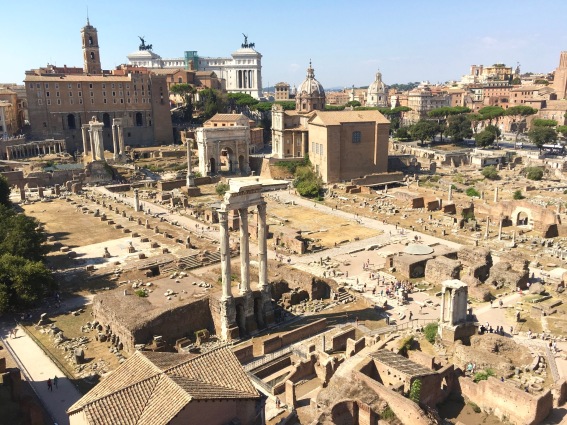 I teared up multiple times while we were walking across the ruins. I wasn’t prepared for it, how well everything was preserved, the painstaking details, the jaw-dropping size of it all.

These ancient sites should get under your skin a bit. Because if you stop and feel the history right beneath your feet, it’s pretty damn humbling.

Secondary sites for us were more of a drive-by rather than racing through the interior of each. The Pantheon, Trevi Fountain, the Mouth of Truth, and the Spanish Steps all fell under this category. 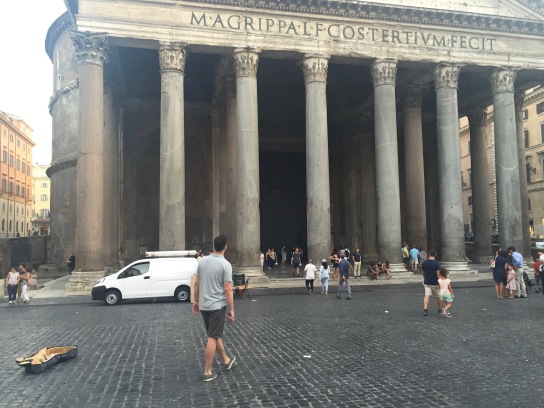 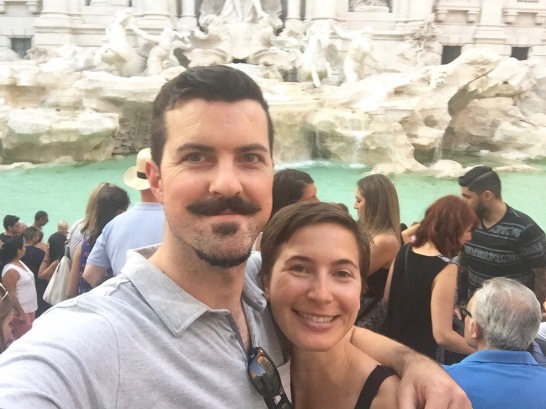 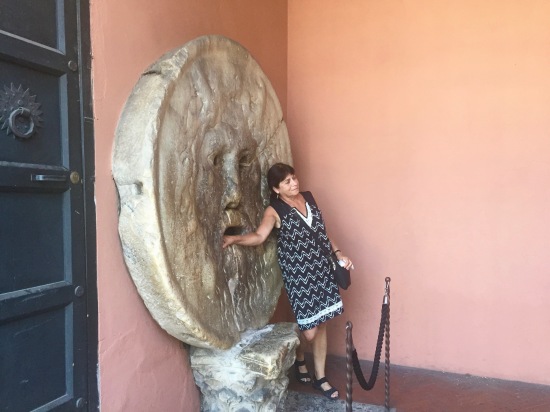 Be prepared for a letdown, because invariably there will be a site under restoration. Case in point, me pouting in my new pretty dress I wore just for the Spanish Steps, my illusions shattered before the Plexiglas.

How to Savor Rome’s Food

The main focus of our Italy trip (and pretty much any trip for that matter) is food. While it’s easy to get wrapped up in Rome’s bountiful history, you are doing yourself and the city a disservice by merely treating food as fuel.

You’ve probably heard warnings about the tourist traps, with English menus and the salesy host casting his wide net in front of the expansive patio to see how many hungry tourists he can catch. This is all true.

And—she admits with her eyes glued to the floor—we ate at a couple of these restaurants when we were too desperate to care. As expected, we paid extra and the food was so-so, but thankfully nothing was terrible.

On a positive note, the service was decent enough and the scenery and people-watching were terrific, since most of these restaurants have commandeered Rome’s historical center.

So, my dear foodies, you know what to do.

Though your English-speaking will be far from coddled, head to the neighborhoods. Feel free to gawk at everyone’s laundry on display, which for some unexplainable reason is completely mesmerizing.

We stayed in an amazing AirBnB in Pigneto, a Southeast neighborhood they call Rome’s Brooklyn. (Huge shout-out goes to Fabrizia and Antonio for being the best hosts…EVER!)

Though several of the restaurants were closed for the August holiday, we found great cappuccino at Bottiglieria and even greater mortadella sandwiches at Dar Ciriola, which thankfully opened on the last day of the month so we could try their yummy food before traipsing off to Florence.

The Jewish Ghetto should also be a non-negotiable stop, because believe it or not, Italian food lovers—you will be totally sick of pasta and pizza after a few days.

Thanks to our hero Anthony Bourdain, we were armed with restaurant knowledge to avoid any mishaps, and enjoyed a mind-blowing lunch at Nonna Betta. The fried artichoke looked as beautiful as it tasted, and everything else we tried, from the fish of the day to the potatoes, made us smile like absolute fools.

Where’s the pasta, you ask? Well…

It took us a while to find pasta worthy of a photo after several misses in the tourista zone. But a few blocks away from the Spanish Steps, we hunted down one of Rome’s classics, Cacio e Pepe—a seemingly simple spaghetti dish with olive oil, pecorino cheese, and black pepper that will move you when it’s done right.

I can’t tell you which restaurant this lovely pasta came from, because we paid with cash and I was too spaghetti drunk to remember. Like we did, you’ll just have to try all the pasta in Rome until you find the right one.

How to Savor Rome’s Gelato

Not all gelato is created equal, so I challenge you to try as many Gelateria as you can. I didn’t think there was a such a thing as lackluster gelato, until I had a forgettable fruity cup near the Colosseum.

The one tourista zone you will find excellent gelato at though is Trevi Fountain. Competition is fierce here and each quaint shop is hell-bent on wooing you with a cheerful canvas of creamy, colorful gelato piles.

You will seriously be dazzled by the window displays, because they are like art installations.

Gelato isn’t supposed to be eaten inside, as it is designed to be enjoyed while you walk around the city. Choose your weapon—cup or cone—but I vote cone, for the guaranteed sense of childish joi de vivre.

If you struggle with doing multiple things at once, find a perch next to a fountain to slowly devour your gelato. You’ll know you’re savoring your gelato properly when your hands are sticky from the drips that overcame your flimsy napkin.

Favorite flavors for me: mint chocolate, tiramisu, and nutella. And yes…I’ve been having gelato withdrawals since coming home.

Rome is really too much for words, so I won’t go on anymore. For me, the hidden layers inside the city competed easily with the most popular attractions.

If you don’t know what I mean, walk into the smallest cafe and drink a proper cappuccino standing at the bar. Lick the most incredible milky foam off your lips, listen to the lyrical Italian language mingling effortlessly with the city’s energy, and then you’ll understand.

Rome just has a way. It gets inside you.

Stay tuned for upcoming posts on Florence, Cinque Terre, and Venice. Because there is no way to fit all of the gorgeous photos and videos from this trip into a blog, check out my Instagram this month for more on Italy.

P.S. If any of you crazy kids decide to listen to the audio version of this blog, I’d love to hear what you think! It’s all part of my “less screen time” campaign. 🙂

Leave a Reply to Zen A. Cancel reply