The other night I was thinking about all the years I spent listening to music in the car. Just me—with the windows down, one arm dancing in the breeze, the beats driving me forward to the rhythms of the road.

In Southern California having music in the car was a must for me—as there was always one certainty, no matter how uncertain life seemed at the time. Traffic.

But no matter how late or pissed off I was, the radio was always right there with me.

Commercials were like the intermission before the show. They were annoying, sure. The constant drone of Trojan condom and disposable contacts ads wasn’t all bad. It was the build up before the music started again.

That was the greatest moment. That was when all the bullshit went away. It didn’t even matter if you liked the song or not. Remember that?

The ups and downs of the old radio experience were kind of lovely. By today’s standards, it was crappy. Now we have unimaginable options—with no build up, no anticipation.

There is so much instant gratification that it’s never enough. We are never content. We are stuck in the traffic of discontentment. In Yoga, one of the Niyamas is Santosha, which translates to “contentment.”

Often the things we think we need are just wants. Wants are manipulative, and they can fool us into thinking we will not be happy until we get that certain something.

I know that whole I’ll Be Happy When concept all too well. I think many of us do.

By fueling our desires in a constant frenzy, the opposite of the intended result transpires. We thought we were going to become happier after we got what we wanted, but it didn’t work. Or we were happy for a few seconds, then it vanished.

The other day a coworker of mine was running late, because he forgot to plug in his car. The week before that, a couple of the guys were discussing their new home automation systems.

I was floored by these conversations. It’s nothing against my tech savvy coworkers, but all I could think was: Damn, what is this? The Jetsons?

Kind of. Technology keeps on coming, and we latch onto the next big thing. We want life to be easier, quicker, customized to fit every possible “need.”

We are hunting contentment like it’s easy prey. Well, it’s not.

I fall into this mindset as well, get roped up by the ever-changing world we live in. Then I stop and notice. And for some strange reason—though I haven’t owned a car in seven years—recently I started missing my beat-up car radio. 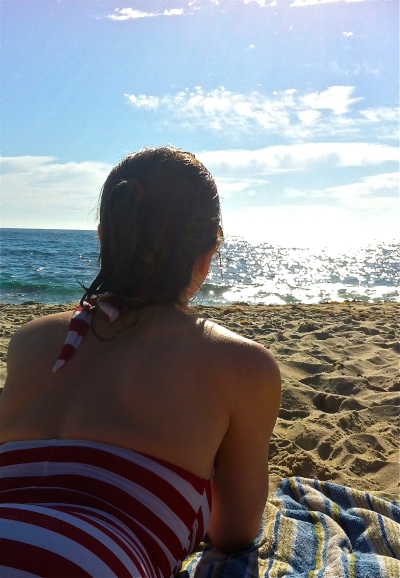 The best times were beach trips with my girlfriends back in high school. We would sing and dance all the way home from the beach. There was sand on the floorboards and our skin was still hot from the sun. Our hair was crunchy and salty, and our muscles were exhausted from playing in the waves.

Traffic was a good thing then. It meant we could hang onto the beach a little longer, avoid responsibilities like chores and homework—those times of dumb innocence we would never feel again.

As adults we see traffic as nothing but a nuisance, and sometimes it can wreck our entire day. Where’s the appreciation for being nowhere and doing nothing? Where’s the singing and the dancing, because we don’t care?

Don’t we all miss those times…when things were so simple?

Anyway, you all know that I’m just another old soul. Or as I like to say…a vintage soul. I rant about technology, but I use it just like anyone else. I use it with a bit of reluctance, as I know convenience doesn’t equal contentment. At the end of the day, we have choices.

I dusted off my journal and wrote this blog post with a pen. It wasn’t quick and efficient, but it felt beautiful to write simply again—without staring at a bright screen while my fingers raced across the plastic keys.

I guess I’ll always be the nostalgic one, preferring to latch onto the past instead of the future. I refuse to forget the ridiculous joy I felt when a good song came on after a commercial break, and I turned up the radio.

It’s okay, you can be nostalgic here. Tell me about your favorite radio memory.