One night last week I decided to treat myself to a Yin class. Usually I go for Vinyasa, because I adore the active flowing movement of this practice.

But, I’m also a firm Yin believer—especially with go, go, go people like yours truly.

I’ve been incorporating Yin into my practice for the past three years. I stumbled upon it accidentally, since I had a teacher that specialized in that particular style.

I remember the first class I took was so different from anything else I tried. In fact, I was confused.

Because though it looked like we weren’t doing much, it was one of the most difficult classes I have ever taken.

Mentally and physically Yin is ridiculously challenging. The poses are usually held for five minutes and rather than fighting the emotion and the body, you have to surrender.

For you Type A people like me, surrendering is just something we don’t do. Which is why I love Yin. It is a true test of what I am capable of, when I explore this unfamiliar stillness.

Well, there’s someone else that loves Yin in this house. Someone that looks a lot like a stuffed animal.

For any Yogi with pets out there, you understand the struggle with having a regular home practice.

When you’re on the floor, you’re fair game. You will be licked, mounted, and humiliated.

Aphrodite the cat usually gets kicked off my Yoga mat once sun salutations are in full swing, but she always comes back at the end of class and we do Savasana together. (It’s her favorite pose.)

So, when I took an advanced Yin class the other night—meaning seven minute holds instead of five—she took the entire class with me.

No, she wasn’t stretching next to me. She was on me.

I realize that grabbing an iPhone to snap pix and take videos during any Yoga class is taboo. But I needed to show proof to the world that humans aren’t the only ones that like Yoga. 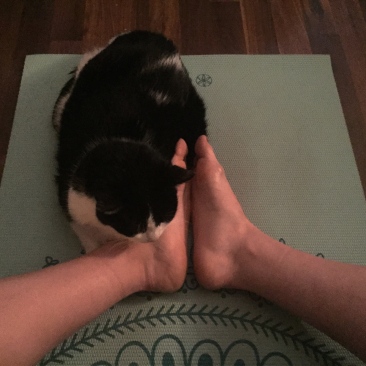 To tell you the truth, even though I’m usually irritated with my cat for “disrupting” my Yoga class, the other night I was fascinated with our time together.

She moved with me, from pose to pose, because I let her be. It’s an interesting concept—to let things be and see what happens.

(Some of you have seen this video already on social, but in case you missed it, here we are in Pigeon Pose together. Being awesome.)